You can get the BattleCON Online OST from Bandcamp for $19.99. The profits go to Level 99 Games.

In the fall of 2014, I began work on the soundtrack for BattleCON Online1, an online PvP adaptation of the two-person battle card game by Level 99 Games. The project began on Kickstarter and was only released this past fall on Steam in Early Access. You can download and play on Steam for free, with the option to purchase certain fighters and costumes in-game2.

(That’s an image because I don’t want to deal with Steam’s tracking cookies.)

BattleCON Online development synced up with my time in college. Towards graduation, I got pretty busy, so the last set of character themes was written by the talented Wesley Slover, who works under the label SonoSanctus and also handled the final mixing and mastering.

The result of our efforts is a highly energetic OST that Steam reviewers have heralded as terrific and mostly-good— hold on, “mostly-good?” 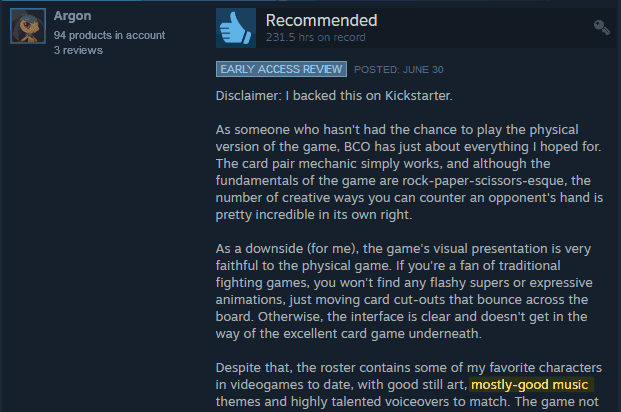 Since you are no doubt wondering what goes into the making of a mostly-good video game soundtrack, allow me to present some behind-the-scenes commentary! Most of this work was from at least three years ago, so I don’t remember many useful things about it, but I’ll try to say words in an order that I hope you find humorous and insightful.

The reference tracks I got for this project were all symphonic heavy metal. I don’t know if you know this about me…….. but I’m not very good at guitars. I managed to trick Chris Niosi into somehow believing my guitar patches were fake, while everything else was apparently handled by a live orchestra. Consequently, there is a noticeable progression from attempting guitars to a defiant “I’m doing it MY WAY!” tone embodied by the spiccato cello. I read in a book once that good managers capitalize on strengths rather than mitigating weaknesses. (◡‿◡✿)

Most of the ensemble orchestral instruments are handled by SONiVOX’s Film Score Companion series. SONiVOX sound quality is what is known in the Steam community as “mostly-good,” hyphenated, and their bundle collection of scoring instruments is usually on sale for around $40, making it a very practical first foray into commercial instrument libraries. I’ve since moved on to 8dio and Spitfire, though that’s mostly because SONiVOX’s proprietary VST player has a really slow initial loading time for its patches and I am a busy lady.

This one is my favorite of the whole soundtrack. The way the violin tends to peter out at points betrays my inexperience using Embertone’s Friedlander (this might have been my second song with it ever — whoops), but the chorus is really catchy in my humble opinion3.

All I have to say about regular Hikaru’s theme is that it has a lot of key changes. The central motif is kind of cute, though.

Panning the one (1) guitar left in Khadath’s theme was a really bizarre choice, past me. Based on this and the previous song, I think you can tell I usually run out of ideas and dramatically switch gears in a standard-length theme around the 1:26 mark.

The little mordants on the flute/glockenspiel are very cute. What was I doing with those guitars though…

The version of Cadenza’s theme in the actual game is different from this one, because 2014 me was an idiot and somehow only left me with a lossy version, so I had to remake it from scratch. For this and other early themes, I was using the erstwhile freeware library Junk Guitar, but I later switched to Shreddage 2. My involvement with this project actually began as more casual character theme commissions for a friend who was a fan of the series and later shared them with the community. This was the first I did for him, and the second was…

Honest to god I don’t remember making this one at all. Certain parts of it are distinctly plasterbrainian, though, so it must have been made by an alternate universe me.

I’ve spent my whole life trying to sound like Bomberman 64. Today, I have succeeded. The Embertone Friedlander makes a return here.

This is another good one! I think the strength of this piece is that it doesn’t seem random, and yet it’s surprisingly atonal for most of its runtime. No, I don’t know what happened to the lower end. I probably tried to cut it owing to the melodic use of a low cello and overshot quite a bit.

Karin and Jager are werewolf twins who share a total of one human soul and one wolf soul, so only one can be human at a time. In this theme, I have a melody and harmony at the start that end up switching places midway through, so that the harmony becomes more prominent. …That’s the most symbolic any of this ever gets.

Riflam’s theme is another orchestral-electro hybrid. You can hear me shooting for a kind of Para Para supersaw around the 1:00 mark and missing by a sizeable margin. The softer saw around 2:00 is sort of interesting and unlike me though.

Sarafina’s theme was actually supposed to be a theme for Byron Krane, who’s my favorite but isn’t in BattleCON: Online. (; ･`д･´) Anyway, nobody thought it actually sounded like Byron Krane, so it got repurposed.

I’ve only actually played the real-life version of BattleCON once, against another friend who promptly destroyed me. He’s very lucky I didn’t include a spoken monologue expressing how rude it is not to go easy on your newbie friend in the middle of one of these themes.

Marmelee is very sweet. I would have given her fewer kick drums if I had to do this now, but other than that it’s a very good try.

I like the synth. This was one of the last ones I did, and I think I opted for “sort of mech sounding DnB drums” over symphonic metal as a general feel by this point. The bass and drum parts are much wilder than what I usually write. Off the top of my head, I’d guess that violin-like instrument is being done by the Fischer Viola. It’s kind of the only sound I don’t like here. You have to be purposeful with a solo viola and here I just used it out of the box without much thought.